Introducing the Next Generation to Plastic Processing 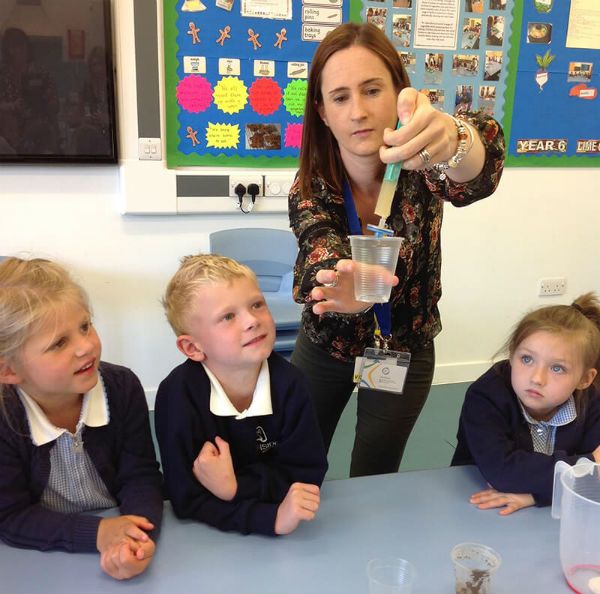 Equipped with ‘Olly’s Cool Box of Plastics’ and a whole load of enthusiasm Gabby worked with four classes of KS1 (Year 1 & 2) pupils enabling them to take part in various polymer based experiments.  The kit, developed by PlasticsEurope, has been used successfully throughout Europe to engage young people and to demonstrate some of the key properties of plastics.

The children were first shown a wide variety of ‘everyday’ plastic products such as cups, spoons, toys and bags, feeling the various textures and flexibilities and exploring different uses of plastics and discussing where plastic comes from.  The children were very animated when discussing the use of plastics within their everyday home, school and outdoor environments.

Moving on the children were able to actively get involved in the five different experiments which explored expanding polystyrene, absorbency, filtration, plastic films and making formed plastics.  Each experiment showed the children a different element of plastics.  The most popular two experiments were the expanding polystyrene whereby Gabby showed the use of polystyrene in a bike helmet and by enlisting the help of ‘Egbert the Egg’ was able to demonstrate how this keeps us safe should we fall off a bike.  Needless to say, things did not end well for Egbert when he fell without his bike helmet on…

The other experiment that really captured their minds was the filtration of water.  Starting with a muddy concoction the water was firstly sieved to remove the large lumps of dirt then run through a paper coffee filter to further cleanse the water as the water was still an unpleasant shade of yellow at this point the plastic filter was the final stage which drew out the tiny particles of dirt that remained to deliver a clear and uncontaminated water.  Some of the children at Arunside have recently been studying the topic ‘Around the World’ and this experiment opened up conversation surrounding the lack of clean drinking water in third world countries that they had been looking at.

Rounding up the session the children made the most of the Q&A session and discussed what they had learnt.

Mrs Evans, STEM co-ordinator of Arunside School says “KS1 have enjoyed having Mrs Day visit from a local plastics company bringing a variety of polymer based experiments into the classroom for the children to enjoy. They had a great time taking part in many fun experiments!”

Gabby also took part in the Big Bang Fair South East (organised by STEM Sussex) taking a seat on the panel of ‘Meet the future you’ panel.  This is a speed networking initiative where students attending have to ask questions to determine the panels STEM related job roles and then have a discussion to find out more information about what the various roles involve.  The attendees were mainly year 10 students from a variety of schools across the south east.  It was anticipated prior to the event that those attending the sessions would take every opportunity to find out about life in the work place and the potential careers available to them going forward, however this sadly did not appear to be the case as it proved difficult to draw conversation out of a large majority of the students.

Taking a look around the main area of the fair the well organised event gave students a fantastic spread of business and career guidance.  Anyone attending would have come away with some form of inspiration to carry them forward.

As a business Pentagon believes that it is not only important to promote its services and look after its valued customers but also put some time aside to aid the future of our thriving UK manufacturing industry.  Supporting initiatives such as these is very rewarding and after all ‘every day is a school day’.