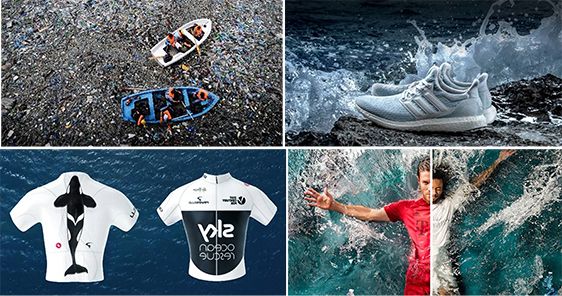 The world is becoming increasingly aware of the damage to fish and marine life caused by plastic waste in our oceans. Indeed, many sporting organisations have engaged in activities to raise global awareness of this problem.

Envision works with leaders in the area of ocean plastic collection including long term Adidas partner Parlay for the Oceans and the Plastic Bank to repurpose plastic that has being collected in one of two ways.

The first material stream is plastic that has been harvested directly from ocean rubbish gyres (large vortexes of material that collect in specific areas of the oceans due to current and prevailing winds) or from beach debris collections. Our tests have shown that this material is generally very difficult to process as it may have been drifting in the oceans for up to 30 years before being collected.

The second stream of material is from plastic collected in countries like the Maldives, Haiti or Madagascar. These countries typically have naturally beautiful seascapes but have no recycling infrastructure. Money raised through recycling programs in such countries is used to pay a wage to the poor local population but also to fund education programmes on the dangers of Ocean Plastic on the long-term sustainability of the local environment. Operating on the “Prevention is Better Than Cure” model these programmes provide local people and businesses with an alternative to dumping plastic waste and ultimately prevents plastic waste from entering the oceans. This second stream of material is referred to as ocean bound plastic.

Over the last number of months tests have been completed in Mergon International and Mergon Corporation on automotive air ducts and washer tanks that have been made using ocean plastic and ocean bound plastic.

These sample products are currently under evaluation at a number of Mergon customers and it is hoped that Mergon can get approval and move into production over the coming months.