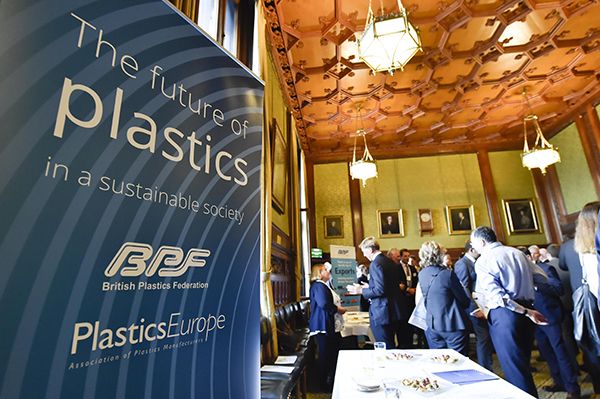 On Monday 10 September, The British Plastics Federation (BPF), in conjunction with Plastics Europe, held a Parliamentary Reception called ‘The Future of Plastics in a Sustainable Society’.

The event took place at the Houses of Parliament and was attended by 162 people, including 22 MPs and a further ten government representatives. The sponsor of the event, MP for Rugby Mark Pawsey, welcomed everyone before explaining that MPs recognise the important contribution plastics manufacturers make to numerous local economies.

“Through my own experience of running a packaging business, I am delighted to support the work of the BPF and all its members. I am very pleased to hear that so many of you have welcomed parliamentarians to your plants in order to educate and inform them of the huge contribution the industry makes, both in terms of the products you produce and the local economies you support.”

He was followed to the stage by BPF Director General Philip Law, who highlighted the importance of plastic in reducing fuel consumption, food waste, CO2 emissions, as well the key role it plays in healthcare. He stressed the issue we are facing is not about plastic but how we treat plastic waste.

Law then criticised the idea of a blanket tax on virgin polymer, arguing that it sends the wrong message about plastic to retailers, brands and the public. With business conditions uncertain due to Brexit, he argued it would discourage investment and could damage the competitiveness of the UK’s third largest manufacturing sector (in terms of employment figures) at “precisely the wrong time”, and that shifting to alternative materials could have both anticipated and unintended impacts on the environment.

Law warned that taxing virgin polymer across the board risked raising the price of recycled material too, as there is not currently not enough recycled plastic to fulfil a sudden influx of demand and that the UK would be left relying on imported material.

He then laid out the BPF’s preferred alternative to the ‘plastics tax’: reform of the existing Packaging Recovery Note (PRN) system. Unlike the plastics tax, Law argued PRN reform would guarantee funds are invested in the UK’s waste collection and recycling infrastructure, invested in new technology such as chemical recycling, and that modulated fees could incentivise the use of recycled content as well as products that were designed with recyclability in mind.

“Crucially, reforming the PRN system would guarantee continuity for businesses, and ensure the money ends up where we need it: in an improved infrastructure, freed from its indefensible reliance on export, allowing us to manage and monitor our own waste.”

He closed his speech with a call to the government to look at the current, complicated debate about plastic waste objectively, and to acknowledge the positive contribution plastic makes to both society and the environment.

Next to speak was MP for Middlesbrough South and East Cleveland Simon Clarke, who had overseen a port in his constituency, Teesport, which is operated by PD Ports, sign up to Operation Clean Sweep — the highly successful industry initiative to minimise the possibility of plastic raw materials leaking from sites. PD Ports is the first UK port operator to sign up and the Group Health, Safety and Environment Manager David Jones was presented his Operation Clean Sweep certificate by Clarke.

Today’s news is a major step forward in the fight against plastic pollution and will delight the hundreds of my constituents who take part in regular beach cleans at Saltburn and along our local rivers and streams.

Parliamentary Under-Secretary for the Department for Environment, Food and Rural Affairs (Defra) Therese Coffey MP then addressed the crowd, reassuring the industry the government, in reviewing its Waste and Resources Strategy, was not intent on trying to eliminate plastic. Coffey mentioned that it was understood how plastics help the environment in many ways, such as reducing CO2 emissions and food waste.

After a short period of networking, the event was closed by Parliamentary Under-Secretary for the Department for Business, Energy and Industrial Strategy (BEIS) Richard Harrington MP. He said that the government’s Industrial Strategy, as he saw it, showed a partnership between government and business, that the plastics industry has a huge future and that he was pleased that the government will continue to support it via various schemes, such as funding R&D.