Werkzeugbau Ruhla GmbH, a leading supplier of modular mould solutions for the medical industry, has partnered with EWIKON to design and manufacture two high-cavity moulds for the production of a three-part safety vaccination syringe.

Disposable vaccination syringes for standard vaccinations are needed in billions of units. With the start of the vaccination campaigns against COVID-19, demand is increasing additionally, so that production capacities must be further expanded worldwide. Injection moulds that are available as quickly as possible and that can produce vaccination syringes quickly, efficiently and with minimal material usage are therefore in demand.

With this in mind, Werkzeugbau Ruhla GmbH in Seebach, Thuringia, Germany, designed two 64-cavity full hot runner moulds for the production of the barrel and the piston of a three-part 0.5 ml safety vaccination syringe made of PP for use in primary vaccinations. For many countries, additional strict specifications of the World Health Organisation (WHO) apply here for vaccination syringes. The vaccination syringes must be designed in such a way that multiple use is not possible.

As a specialist for medical precision mould solutions, Ruhla consistently relies on a modular concept with a high degree of standardisation in-mould construction, which was developed and perfected in a long-standing partnership with hot runner supplier EWIKON. The focus is on a compact and weight-optimised mould design with efficient cooling and high ease of maintenance, which can be used on the smallest possible machine sizes. On the hot runner side, the focus is on lateral direct gating with the high-performance HPS III-MH multi-tip nozzle concept, which is used in two nozzle versions and guarantees the high gating quality required for medical components.

For the production of the syringe barrels, a radial nozzle, which is specially developed for the syringe production, is used. It features extended tip inserts and a particularly slim nozzle body whose immersion depth can be flexibly adapted to different article lengths.

“With this nozzle version, there is enough installation space between the nozzle body and the article contour to provide our mould inserts with a surrounding cavity cooling.”

“This design is standard for all our syringe moulds and, in combination with inner cores that are also cooled, allows very short cycle times. The design of the mould inserts also makes them very easy to replace.”

For the production of the syringe plungers, which are arranged in a row in the mould, the linear version of the nozzle with a rectangular body is installed.

All mould solutions from Ruhla are developed with special attention to a high degree of maintainability, which facilitates routine maintenance work even when used worldwide. An important contribution to this is made by the EWIKON tip exchange concept, which enables the tip inserts to be easily replaced on the machine without having to dismantle the mould. 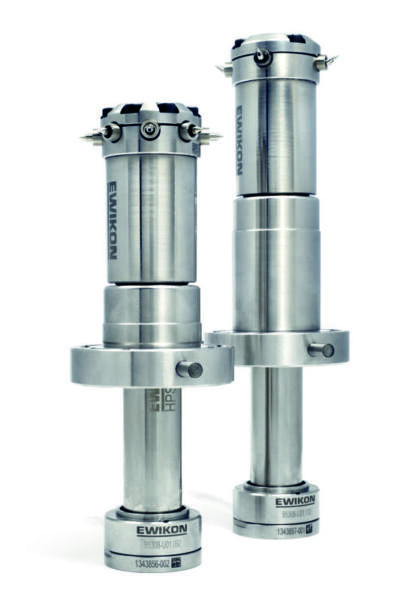 “In addition, there is the modular design, which integrates the nozzles, including the complete wiring into a separate mould plate, which can simply be pulled off in case of a nozzle exchange.

“This makes the nozzle easily accessible and it can be dismantled in a particularly time-saving manner. Again, EWIKON supports us perfectly with a corresponding design of the wiring boxes with special plug-in connections.”

The article design for both components of the syringe was optimised in close cooperation between Ruhla and the end customer. This resulted in the greatest possible material savings through reduced wall thickness and length.

“With a weight of only 1.1 g for the syringe barrel and 0.35 g for the plunger, we were able to save 25% of material compared to conventional vaccination syringes of the same size, which means we have one of the lightest syringes currently available on the market.”

EWIKON provided support based on filling studies and extensive calculations of pressure and shear in the hot runner system to ensure efficient mass production with short cycle times.

Two circular recesses are integrated into the wall of the syringe barrel to form defined locking positions for the plunger. When the syringe is drawn up, the plunger locks into the rear position when the filling volume of 0.5 ml is reached. After the complete injection of the vaccination dose, the front locking position is reached. From now on, if an attempt is made to fill the syringe a second time, the plunger will tear off at two defined predetermined breaking points and the syringe is unusable. The syringe plunger was also consistently designed for low weight and maximum material savings by using a three-rib design. Furthermore, the design of the three-part vaccination syringe requires a no slide mechanism during demoulding and thus simplifies the mould construction considerably. 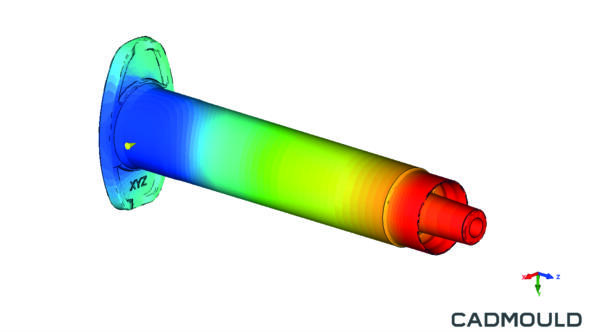 Despite the extremely high numbers of cavities, a very compact mould design could be established. In both moulds, eight nozzles are installed in a radial respectively linear version in two vertical rows of four. In the 446mm x 596mm syringe barrel mould, eight parts are arranged in a circle around each nozzle. The gating is done with heat-conductive tips angled by 60° on the sidewall of the cylinder, close to the bearing of the inner core, in order to minimise core displacement. In the syringe plunger mould, eight parts per nozzle are placed in two rows of four on both sides of the rectangular nozzle body. The plunger is gated on the grip plate. The mould dimensions here are 546mm x 596mm. The hot runner technology for both moulds was supplied by EWIKON as a complete hot half with integrated electrical wiring and connection technology and completed at Ruhla with the contour plates and the ejector side. Thanks to the high level of standardisation in conjunction with modern production technology – including a fully automated production cell for electrodes – Ruhla was able to realise the entire project from receipt of order to pre-production testing in its own technical centre to delivery to the customer with a very short lead time of only 16 weeks. With a cycle time of approx. 10s for the syringe barrel, expectations were fully met. 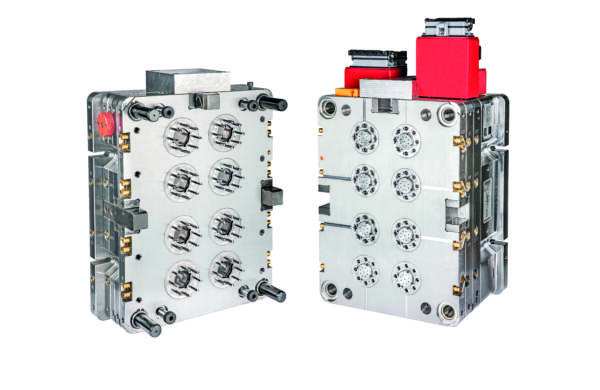 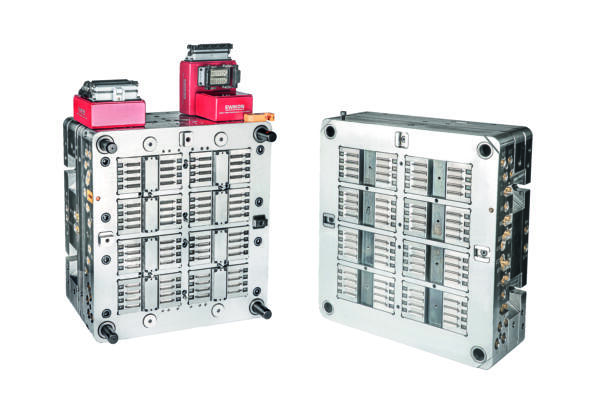 The delivery comes with a comprehensive service package that not only includes the most common spare parts and a detailed operator’s manual but also detailed disassembly and assembly videos for the most important maintenance work. The overall concept is convincing. Another mould set for the same syringe size has already been ordered by an Asian customer and a 0.3ml version – the common COVID-19 vaccination dose – is already in the starting blocks.

“This is where the advantages of our modular concept become apparent,” says Lena Lüneburger, “because even the smaller version can be realised quickly and easily by simply moving one of the recesses in the syringe barrel.”