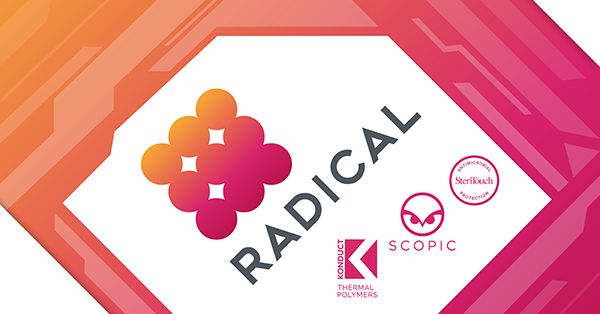 SteriTouch began in 2003 as an antimicrobial additives supplier, quickly gaining a reputation in the plastics industry, due to its recognisable co-brand. Over the years, SteriTouch has co-branded with some of the world’s leading brands, including Sennheiser, Mothercare and World Dryer. The expansion of production facilities and a technical testing laboratory has seen the company move premises twice, most recently in 2017 with a £500,000 investment in an industrial unit in Ebbw Vale, South Wales.

The SCOPIC brand of metal and X-Ray detectable masterbatches and compounds was launched last year, along with the purchase of an industrial metal detector for testing purposes. The SCOPIC range services the food processing and pharmaceutical sectors, where plastic products using the technology can be detected should any part contaminate the line.

Another recently launched product range is Konduct, thermally conductive polymers for heat dissipation in applications such as LED lighting and heat sinks. EMI shielding and anti-static masterbatches and compounds will also be launched under the Konduct brand in due course.

It had become clear to SteriTouch that the company name was limiting, since it was now offering so much more than antimicrobial additives. The brands SteriTouch, SCOPIC and Konduct will now feature under the Radical Materials banner going forward.

“Our focus has always been on delivering the best possible solution for every application, which led many of our customers to approach us with projects falling outside our established expertise, such as detectable materials or functional modifiers. As this aspect of the business grew, and we invested heavily in the development of bespoke solutions, it became very evident that the SteriTouch name was no longer an accurate representation of the products and services we provide.

“While SteriTouch remains a crucial element within our portfolio, the decision to change to a name with a broader, less restrictive scope was an easy one. Choosing the name itself proved somewhat less straightforward, but we feel that Radical Materials is an appropriate reflection of our strategy and aspiration for the next fifteen years.”