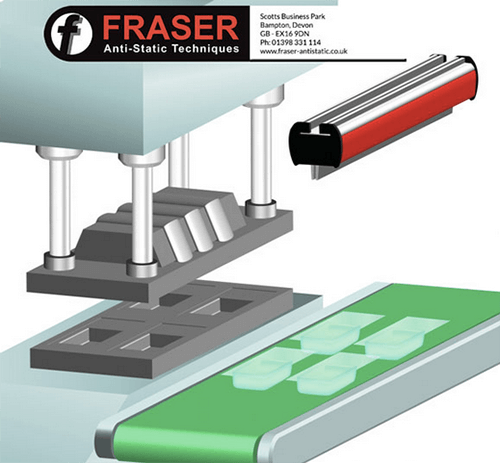 Despite the ongoing Brexit negotiations, Europe remains a key export market for many UK manufacturers.

Although the legal and trade outcomes from Brexit are unknown, the underlying demand for increased manufacturing efficiency and flexibility to compete in world markets is undiminished.

“Although efficiencies can naturally be achieved through improved running speeds etc., the changing nature of materials and production processes are actually causing their own problems… on both new and existing equipment.”

The UK plastics industry is a perfect example of this, where changing consumer demands have had a direct triple impact upon production materials, processes and production speeds.

“If we look at film manufacturers and processors, we’re seeing increases in production speeds from 600 to 1500m/min. At these levels, we’re generating significant amounts of static and wind turbulence. Not only is it impossible to run at maximum efficiency with this level of static charge, but the knock-on effects for quality and operator risk are significant.”

“This issue is exacerbated further with larger winder reels, and even high end films such as BOPET polyester films, which have a capacity to store a higher degree of static charge.”

With so much potential for static issues, you would expect widespread knowledge of how to manage this problem. However, Bruce suggests that this isn’t always the case “in some instances customers actually have static elimination equipment in place, but it’s simply ineffective. In other cases, the customer may not attribute line stops and quality issues to the presence of static.”

“As the demands placed upon plastics related manufacturing increase, so must the power and flexibility of static elimination equipment.”

As a result, Fraser Anti-Static Techniques has developed a range of high performance elimination equipment, including the 3024 and NEOS 24V DC range. These are used extensively throughout the world, with market leading features such as remote monitoring, 100% coverage and variable output optimisation.

In order to solve complex static elimination issues, Fraser Anti-Static also has a UK based technical team, and over 60 international partners all available for site visits and investigations with a strong track record of success in finding and eliminating static problems.