The Origins of Moldflow 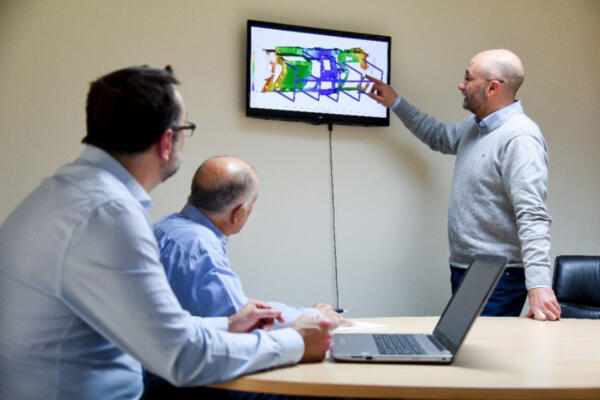 Since its introduction in the 1970s (yes, ’70s!) Moldflow software has revolutionised the design of plastic products using scientific principles. Why then, is this technology still regarded as new by many? Graham Webster, Director of Plastic-IT and ex-Moldflow employee, explains the origins of this sometimes misunderstood simulation tool.

Today, 2020, the word ‘Moldflow’ has become the victim of trademark antonomasia – it is now the generic name for the technology and methodologies that were first created by Colin Austin in the early ’70s.  Yes, really – that long ago.  Colin formed the Moldflow company in 1978 – meaning that most engineers short of UK retirement age, have been able to access the technologies all of their working lives – yet it is still regarded by many as ‘NEW’ technology.

Colin’s original work was done in Australia, to where this Englishman had emigrated some years before. He aimed to be able to predict the pressure required to fill a mould cavity just from the 2D drawing of a component’s geometry. A mathematical description of the longest (or most pressure demanding) flow-path – from the feed position to the edge of the mould cavity was constructed as a strip and subdivided into short equal-length sections.  The rheological properties of one of a few characterised polymers from the rudimentary database were selected, together with ‘processing’ conditions – mould temperature, polymer temperature and rate of filling. All of the data was then computed to calculate the shear rate, polymer melt viscosity, polymer temperature and pressure required to move the polymer along the ‘strip’. These outputs were staggeringly useful to the few of us in the world that recognised the potential. Describing several different flow paths across the component geometry enabled a seriously useful concept of how the mould would fill and what pressures were required, and so started a whole new design philosophy for injection moulded parts.

But this was not an academic enterprise; this was the product of a fledgeling commercial business whose resources for development were fundamentally derived from sales of the commercialised software for use on mainframe computers; this definitely restricted the market. All of this was happening three years before IBM launched its Personal Computer (August 12 1981) and that was nine years before a Graphical User Interface (GUI) called Windows 3.0 became widely used. During this period, the software was modified and compiled to work on myriad operating systems for a host of ‘WorkStation’ computers. Companies such as Apollo, Silicon Graphics, DEC, HP and IBM all vied for dominance in this new ‘desktop computing’ marketplace. DEC was the most successful.

Although there has been continuous development, refinement and diversification to accommodate different moulding strategies, by 1993, Moldflow could accurately predict every nuance of the injection moulding process using the proprietary rheological database of nearly 4,000 different thermoplastics. Considered by many as the pinnacle of this achievement, Moldflow software could predict the post-moulding distortion (or warpage) of fibre-filled thermoplastics.

Today, the technology is still regarded by many with much-uneducated scepticism – but as yet, the technology is still only a tool, and by itself or if used without competence, it can be a great demonstrator of the old computing adage ‘Garbage In – Garbage Out’ (GIGO). “Doing a Moldflow,” frequently now as part of a box-ticking exercise, delivers nothing and by association, it appears that Moldflow technology delivers nothing either.

Used along with knowledge and skill however, it will deliver the optimum in product design, manufacturing costs and product performance in the shortest time and lowest cost. Furthermore, if the analyst is engaged at the commencement of a project, the benefits derived from the usage of the technology will always be of greater value than the direct cost of the analysis.

However, in the same way that Microsoft Word has not created ‘wordsmiths’ or indeed, eloquence, Moldflow and today’s other copycat products have not had the dramatic impact on plastic product design that could have been expected. Plastic injection moulding is probably the largest and most widely spread manufacturing process in the world. However, the percentage of engineers that truly understand it from materials, through product design, tooling and manufacture are still few and far between. Those few are all disciples of Moldflow. Plastic-IT Ltd is one of those and was started in 1995 by an ex-Moldflow employee. We earn our living by using Moldflow technology to optimise the development and production of plastics parts across all industries.

Each of Plastic-IT’s services provides expertise along the journey from art-to-part. Working with start-up projects and established manufacturing companies, through all stages of the process, offering customers a concurrent engineering approach. The outcome of this is improved quality, waste elimination and greater profitability from your injection mouldings.