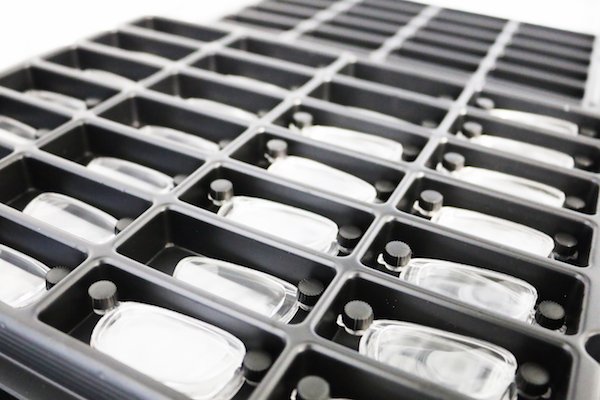 A pair of glasses is potentially one of the most life-transforming products available. Sadly, hundreds of millions of people in the developing world live without the glasses they need because there are no optometrists to measure and provide prescription glasses. Eyejusters believed there had to be a way to address this problem and make this product available to everyone, hence the development and subsequent launch of the Eyejusters range of adjustable spectacles.

The journey from this simple objective to a quality, production-ready range of spectacles would draw heavily on FANUC’s expertise in injection moulding and robotics. It would also use automation partner Hi-Tech’s skills in 3D simulation and its experience in defining a robust production automation concept.

At the heart of the Eyejusters product is its revolutionary SlideLens™ Technology, a lens with a special profile containing both positive and negative power areas. When two of these lenses are placed together, the positive and negative power areas cancel each other out. When one lens is then moved across the other, the amount by which they cancel each other out varies, changing the focus.

A Focus on Moulding

Injection moulding optical lenses is always a challenging process, but the Eyejusters design presented unique challenges that could only be overcome through ongoing product and process development by both Eyejusters and FANUC.

Because the unique Eyejusters lens design has special varying thickness profiles, it is almost impossible to mould the lens with conventional injection moulding techniques. This is because the injection melt front tends to move around the thicker sections before completing the fill at the thin sections, which, in this case, are located in the centre of the lens. Using conventional techniques, it is highly likely that problems with quality, such as hairline marks and air traps, would be present.

To eliminate problems such as these and develop a robust production solution, FANUC supported Eyejusters over an extended period, running a series of moulding development tests.  At the same time, Eyejusters themselves strove to perfect the tool design so that it could work in combination with the unique CNC ROBOSHOT special functions.

The outcome of this process development exercise was a final production solution comprising a special patented mould design, combined with ROBOSHOT’s precision ‘pre injection / compression’ function. The material was injected into the tool under reduced clamp force.  At a precise injection point, full clamp force was then applied to compress the moulding as injection completed.  The precise nature of the ROBOSHOT CNC control meant selected positions to control the process were repeatable within 0.001mm.

With the lens moulding techniques and processes fully defined, the next stage was to consider the integration of the injection moulding process within a production cell. It was at this point that the long-standing partnership between FANUC and Hi-Tech Automation became an essential element of the finished product. 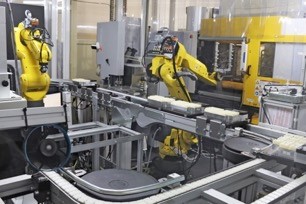 (Hi-Tech Automation was tasked with developing a working specification, selecting the technologies for each of the production processes and steps and building the production cell shown here)

Hi-Tech Automation has amassed years of experience within the plastics sector and, as a certified FANUC Strategic Partner, the company has an intimate knowledge of FANUC’s robot range, making Hi-Tech a valuable addition to the overall project team.

As the “product” was the only fully-defined element of this project, Hi-Tech’s initial task was to develop a working specification for each of the production processes and steps.

This would allow the parts to be removed, transported and handled safely through subsequent processes, without the need to touch the critical optical surfaces.

Now that the first task in the automation process had been resolved successfully, the team could turn its attention to the subsequent processes, including lens coating, component de-gating, ultrasonic welding and final packing into thermoformed trays.

Hi-Tech turned to FANUC’s unique ROBOGUIDE simulation software to design, model and create the layout virtually. Using ROBOGUIDE, the various elements of the system could be tested and developed before any equipment was ordered or manufactured. Further benefits included the ability to evaluate and determine accurate cycle times and to generate the robot programmes offline.

As with any optical product, cleanliness was a key consideration and the techniques used for de-gating and welding would have to eliminate the potential for the contamination of the lens components by particulate matter. Hi-Tech selected laser de-gating and ultrasonic welding processes to perform these delicate operations because they were clean and precise.

With the automation cell built and operational, a Class 5 Clean Room needed to be built around the cell before production level components could be produced. Hi-Tech specified a solution that met all cleanliness standards and incorporated full air handling through entry and exit air locks, thus allowing the cell to begin production.

This partnership approach has proven to be highly successful for Eyejusters, allowing them to get the product into volume production, while safe in the knowledge that all of the key parameters such as quality, performance and predictable productivity levels have been met.