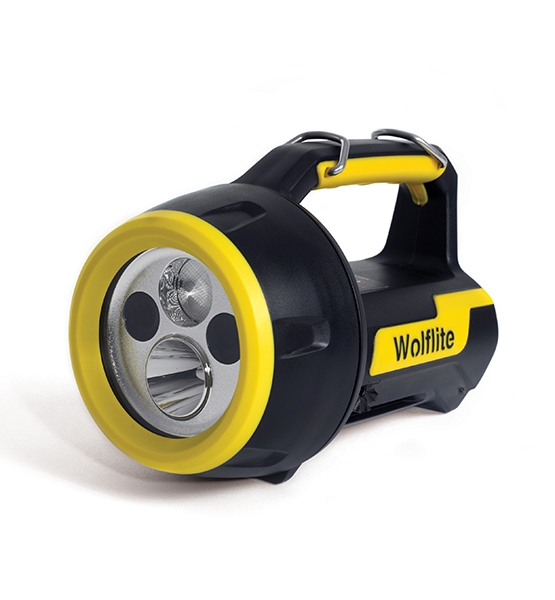 The Challenge: The customer required an injection moulding company capable of producing a complex suite of conventional injection mould tooling for a Safety Handlamp.

The requirement called for the complex Body and Lens Ring to be manufactured using Two Shot technology and to conform to ATEX directive (Appareils destinés à être utilisés en ATmosphères EXplosives which translates roughly to Equipment intended to be used in explosive atmospheres.) The body is not only a very complex shape, it also required a clear lens insert moulding inside; an external threaded form for the fit to the Lens Ring; and to be manufactured in a Nylon material. The Lens Ring also requires an internal screw thread to match the Body. In addition to this, both components needed a second Nylon moulded on to the base nylon for impact, tactile and aesthetic reasons.

As A K Industries has one of the largest 2 Shot Moulding machines in the UK, we were ready and willing to take on the entire project.

We led with our UK toolmaker, whom we have a close, long-lasting relationship, and together the tooling for the 2 shot Handlamp Body and Lens Ring were designed. The customer had a great deal of requirements around key functional and aesthetic features e.g. the exacting fit of the thread between the Handlamp Body and the Lens Ring. As well as this the feature of the “On / Off” function switch, allowing absolutely no evidence of ejection or gating on either part.

Faced with the above constraints, AKI designed the tool so that the main internal form could be produced from the moving half, with precise location for the LED Lens to be moulded in. The complex outside form is produced in slides on the fixed half of the tool. With the gating of the first shot (Black main structure with Wolflite logo) detailed in a hot feed into the back of the component. The larger challenge was to shut out for the second shot (the yellow elements of the component on the handle, around each Wolflite logo and on the back of the Handlamp Body) this was overcome by a single gate feeding into the back of the Handlamp Body and sophisticated internal runner system feeding the handle and two Wolflite Logo areas. The runner channels had to be tailored to ensure the melt was managed to ensure the material was kept ‘live’ to allow the correct filling of these features. AKI also had to profile around the second shot feature of the ‘black first shot’ to ensure a good shut out in the slides for the second shot.

Within a few iterations, AKI were able to produce one of the most complex 2 shot mouldings the industry has seen and are in full production with the suite of components.