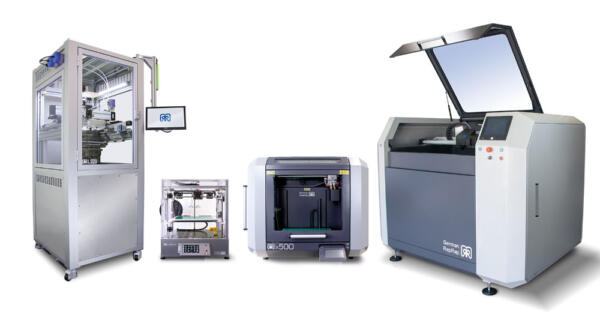 The signing of the purchase contract on 12 February 2020 officially confirmed the takeover of German RepRap GmbH, based in Feldkirchen, by the entrepreneurial families Hehl and Keinath. Founded near Munich in 2010, German RepRap is a German manufacturer of industrial 3D systems “Made in Germany” and will continue to operate as a separate company at its location in Feldkirchen.

The change of ownership will not mean any operational changes for German RepRap’s 23 employees. Founder and Managing Director, Florian Bautz, will continue to run the business in the same way. German RepRap will continue to manage its sales, application engineering, production and administration activities independently. After the takeover, Arburg will work in close collaboration with German RepRap, drawing on its wide-ranging resources to offer support when asked to do so.

The partners consider additive manufacturing to be an important complementary production method for plastics processing which holds significant promise for the future. Due to the successful market entry with the Arburg Freeformer in 2013, the Arburg officials feel confirmed in this assessment. The majority of the applications that use this open system for the processing of commercially available plastic granulates can currently be found in advanced settings such as those encountered in medical engineering and where prescribed material requirements have to be met.

A start-up with experience

German RepRap develops and produces 3D systems based on FFF technology (fused filament fabrication). In 2016, the company added the innovative and globally unique Liquid Additive Manufacturing technology (LAM) to its portfolio, which allows for materials such as Liquid Silicon Rubber (LSR) to be processed. The new x500pro, which processes engineering plastics such as polycarbonate (PC), complements the innovative product range of German RepRap.

The intensive exploratory talks between German RepRap and Arburg included discussions about how the two companies might complement each other as well as possible synergies. It became clear that the range of products and services each of them offers to the market was complementary. Having given the proposition careful consideration, the new owners concluded that the flexible and dynamic nature of the Feldkirchen start-up made it a promising acquisition.

The technological links are clear to see: Arburg’s Freeformer works with droplet discharge and standard granulate for individual applications and the German RepRap x500pro works with filament discharge for standard applications. Further developments will include the processing of liquid plastics (e.g. LSR).