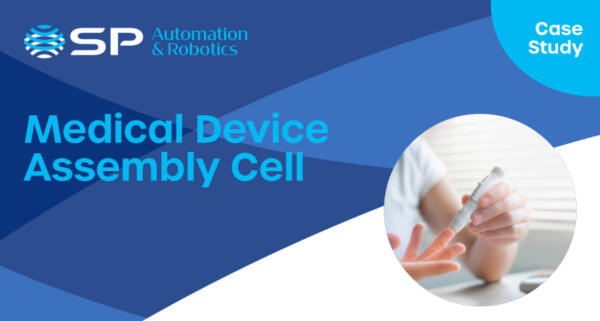 A client of SP Automation & Robotics required a system to automatically assemble a medical device within a cleanroom, comprising of a series of vessels secured in an enclosure. In addition to the assembly, the machine was also required to inspect barcoding on the devices and feed into a packaging machine.

To design and manufacture a machine to assemble a multi-part medical device. The system was required to accept the assembly components from infeed conveyors. The option for bowl feeding of the product was not required.

The device assembly had many permutations and required a control system that would allow the operator to quickly change from assembling a variety of model variants.

It was also a requirement for the system to integrate with an existing final packaging machine.

The system was based around a mechanical indexing precision link conveyor. The conveyor was tooled with machined nests to accept the variety of assembly build-ups.

Four infeed conveyors were used to transfer the components into the machine. The leading component was then escaped and transferred into a nest on the indexing conveyor. Although located, the parts were not assembled until later in the process. To allow for different placement positions (different products), servo pick and place units were used.

The assembled components were then pressed together, with final assembly and bar code inspection taking place prior to the device being loaded onto a packaging machine input conveyor. Reject parts were removed and placed into a segregated area.

Visit the company website for more case studies like this one, illustrating the wide array of industries and applications that benefit from automation.

For more information about this application, or to discuss your bespoke solution, get in touch with SP Automation and Robotics using the details below.