A Match Made in Houston: How FANUC and Renishaw Made Bearing Machining Smart 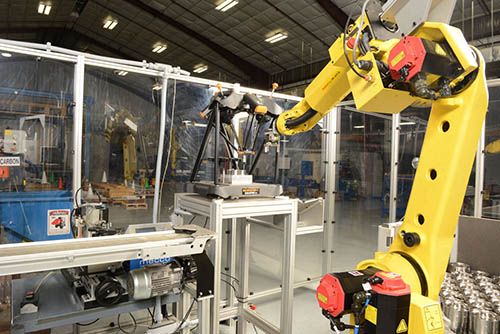 Connectivity and digital manufacturing will be on everyone’s minds at MACH this year. As a result, FANUC is partnering with Renishaw to demonstrate how new technologies are making automation faster, smarter, and more intuitive than ever before. Across the pond, one Texan subcontractor is already putting this manufacturing mélange to good use.

With MACH on the horizon, FANUC has been busy preparing a stand that embodies the pinnacle of automated technology, from cells that incorporate the company’s latest industrial robots and RoboMachines, to software connecting the whole stand as a communicative, intelligent unit.

“Our theme this year is ‘Connectivity’ – something that FANUC has had as standard for many years. We therefore want to demonstrate this by making sure that every exhibit on the stand can demonstrate its true potential to connect to, and communicate with, other technologies,” says Andrew Armstrong, sales and marketing manager at FANUC UK.

For one exhibit in particular, FANUC is looking to give visitors something a little different. The company has partnered with Renishaw, one of the world’s leading engineering and scientific technology companies, to demonstrate how condition monitoring and no-fault-forward capabilities can be applied to machining cells.

“We will be equipping a ROBODRILL a-DiB5B with a Renishaw Equator, a gauging system for defining and reviewing part quality,” says Andrew. “The Equator will scan parts machined on the ROBODRILL, compare them to reference data and identify when quality starts to decline. From there, it can communicate with the ROBODRILL to take corrective measures.”

Looking across the pond

Renishaw and FANUC technologies are already being used together State-side to improve efficiency, productivity and profitability for a Texan subcontractor.

Conroe Machine is a relatively young company, having been founded by Murray “Tippy” Touchette in 2000. The company has since grown to a team of 150 employees, and operates in a climate-controlled, 65,000 square-foot plant located on an industrial estate around 45 minutes from Houston.

Although a general-purpose shop by nature, the company’s proximity to Houston means that a high-percentage of its business often comes from the oil and gas industry: specifically, for drilling components. One of the company’s continuously running jobs for the industry is the manufacture of thrust bearing races for downhole mud motors. These parts are produced by the thousands each week.

Production was originally handled by four lathes, which would rough and finish bearings. They were subsequently re-developed into two cells, which would rough, but not finish. The bearings would be case hardened to HRC 65, at a depth of 1.7mm, before undergoing a finish turning process. The cells were loaded and unloaded by FANUC robots.

“Our production plateaued at 400 to 500 parts per day for each cell,” explains James Wardell. “We had a single operator inspecting parts, but they could only correctly inspect so many at this kind of volume, and we needed more output.

Wardell and Buck went on to install a hard-turning cell consisting of a lathe, a Renishaw Equator, an engraving machine, and a FANUC M20iA six-axis robot.

The new cell is now producing 600 to 700 finished parts per day, and is able to do the work of the two original cell designs. According to Wardell and Buck, the cell paid for itself in an incredible 18 days.

Their success in implementing FANUC and Renishaw technologies has led them to pursue a follow-up project for a customer, which involves a part-sorting cell.

Still in development at the time of writing, this cell consists of two Renishaw Equators, a FANUC LR Mate 200iC six-axis robot, multiple lanes of low-profile conveyors, a FANUC iRVision system, and an ATI quick-tool-changer.

“It’s great to see FANUC technologies employed alongside other smart systems to deliver true value to a customer,” says FANUC’s Andrew Armstrong. “What we’re essentially seeing here is an example of Industry 4.0 in action, with machines communicating to maintain product quality and improve process efficiency.

“Thankfully, if you want to see this kind of functionality for yourself, there’s no need to make a trip to Texas. Pay us a visit at MACH, and you will be able to see a live demonstration of FANUC and Renishaw technology working side-by-side.

“2018 is all about smart solutions, communications and connectivity. At FANUC, we’re just getting started.”

For more information on FANUC’s other exhibits, please contact marketing@fanuc.co.uk. To find out more about the Renishaw Equator, please visit www.renishaw.com/equator.