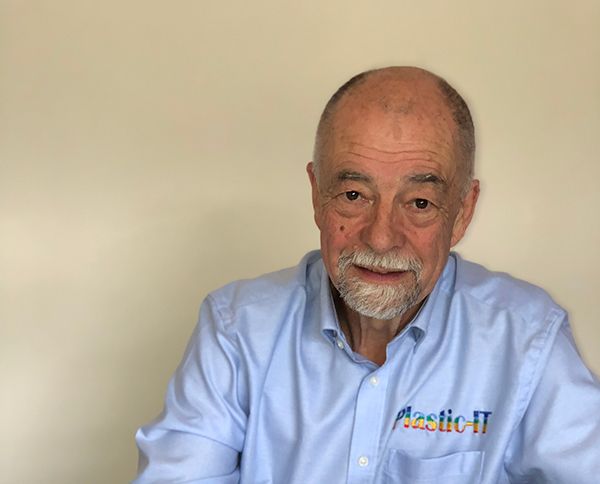 Founded in 1995 and boasting over 70 years of combined experience by father and son directors Graham and Richard Webster, Plastic-IT Ltd specialises in providing an unrivalled service in design optimisation and process engineering consultancy. Graham Webster has 56 years’ experience in the injection moulding industry. He is the next PlastikCity Partner to face the HotSeat…

What trends do you think will shape the future of UK plastics?

Automation with Industry 4.0 connectivity will increase productivity and profits while at the same time reducing costs. There are 8760 hours available for production each year, but most businesses are productive for only between 30% and 65% of the available time. I can buy a robot for less than £30k that will run my injection moulding machine, whereas a human, even on minimum wage, would cost me almost four times that for the same number of hours worked. Sure, it takes more engineering knowledge and skills to employ the robots in a dark factory, however the opportunity for lowering costs and increasing profits is the reward for those that invest.

Fundamental in our plan to start moulding as the next part of Plastic-IT’s expansion was the automated dark factory concept.

How has Plastic-IT developed during your tenure?

Plastic-IT was started in 1995 as a Moldflow authorised consultancy solving moulding problems through the use of CAE analysis – but it’s impossible to grow a consultancy. If you hire another person with the same level of skills, knowledge and intellectual capability they will need to be paid the same as you.  Consequently, you double the business but share the profit – so no gain.  Since 2014 we have grown the business by broadening its offering. First, we partnered with Routsis Associates to bring their World-class online training to the UK, this was augmented by courses on Injection Moulding Technology and Tooling delivered on behalf of Smithers Rapra. The launch of our 4P service offering of Precision Prototype Plastic Parts which delivers real injection moulded parts from steel moulds in 10 days, or less was the next stage and most recently the addition of 3D scanning, partnering with Shape Grabber of Canada. The inevitable progression was the start of our injection moulding facility.

Most definitely it was being fortunate enough to work for Moldflow from 1989 to 1995. Although the technology was in its infancy when I joined, I lived through the development of the predictive capabilities so that we were able to simulate the entire injection moulding process and predict the shrinkage and warpage of parts.  Most significant was the origination of a design and development strategy based on knowledge gained from the predictive technology that facilitated the production of successful parts, tooled and moulded right first time. Sadly, there is still scepticism from those that do not truly understand the process of getting an injection moulding from ‘art to part’. Quite simply, why ever guess when you can now truly predict?

Bringing innovation to the market place. In 1978 I designed and manufactured the first UK pick and place robots to unload injection moulding machines. Mouldmation, the company I started, was 10 years ahead of the market. I remember being kicked out of trade union closed shop companies who refused to allow our ‘robots’ in. There was a Luddite like fear which I recall as quite scary. We did not put anyone out of work but easily demonstrated a 15% increase in productivity just by closing the cycle and passing the moulding to the ‘operator’ that most large moulding machines were attended by.  Sadly, Mouldmation collapsed as did several other early robot companies.  Today they are everywhere.

Selling Moldflow software was a similar challenge – a revolutionary technology which required a greater knowledge of the injection moulding process than most of the market had at that time.  Today, both robot and computer aided engineering technologies are widely adopted.

What advice do you wish you’d had on entering the industry and does that differ from the advice you would give to an Apprentice joining now?

It is so long ago – 1963 – times were much different and with little relationship to today’s opportunities and career paths.  I wish I had studied more and would advise any of today’s apprentices to work hard to gain as much knowledge as possible from a wide range of processes. The best CEOs in this industry also started off as apprentices.

I fly a flex-wing Microlight aircraft and used to instruct too. I still have a couple of motorbikes which get ridden regularly and I am a pretty good shooter of clay pigeons, but my latest interest is pottery – not on a wheel but sculpting.  Must be getting old!