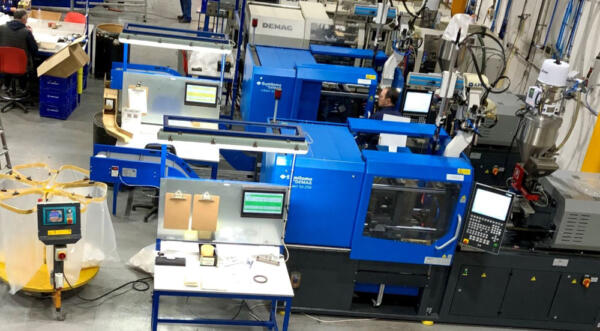 For environmentally-responsible Midlothian-based McLaren Plastics, recent tests performed by Sumitomo (SHI) Demag on two new IntElect2 machines have shown a 60% reduction in their energy bill, saving them over £7,000 a year.

Decreasing energy use is a priority for most commercial businesses. But reporting to stakeholders the true savings and production efficiencies that can be realised are often harder to come by.

Installed in 1995, for over two decades, the Demag hydraulic workhorses had been operating 24/7. The initial measurement, performed by Sumitomo (SHI) Demag’s Technical Manager Nick Stockton, revealed that each legacy machine was consuming 7.2 kilowatts for each kilogram of raw material converted per hour. At the time of placing the IntElect2 order, Sumitomo (SHI) Demag estimated that McLaren could save on average over 5kw per hour, replacing both hydraulic machines with all-electric ones. This was enough to satisfy Resource Scotland, who approved McLaren’s loan grant.

To provide a like-for-like comparison, Nick revisited the moulder in early December 2019. Both machines by this stage had been fitted with the same ancillary equipment, replicating the mould vent and cavity balance configuration and exact processing conditions.

“Running the same product at the same cycle time before and after new kit is installed, with all ancillary equipment plugged in is the only true way to gauge the energy and performance improvements,” explains Nick Stockton.

The first measurement comprised a square packaging black end cap, using a single cavity mould, with a shot weight of 8.2 grams and 11.5-second cycle. As with the ErgoTech 35 compact test, the IntElect 50-tonne machine was equipped with a sprue picker, a temperature control unit (TCU) and loader, but no granulator.  Previously consuming 4.52kw p/h at an average cost of £0.56 p/h, the results for the new IntElect2 dropped to 1.93kw p/h, saving 58% and the company £0.32 p/h, or over £2,700 annually for a machine operating 24/7.

The second test measured the production of a white automotive bracket for a premium passenger car. With a shot weight of 29.9 grams and a 31.5 second cycle time, the component comprises two different parts moulded in a 1+1 cavity tool. A tool heater, material dryer, TCU and loader were connected to both machines during both 30-minute tests.  A 62% energy saving was documented on the IntElect2 test, reducing from 7.33kw p/h to 2.81kw p/h. Calculating the physical costs and how this could impact the bottom line for a moulding business, this reduction in energy usage equates to a saving of approximately £4,360 per year, exclaims Nick.

In addition to scrutinising energy performance, the tests also examine other factors, including the parallel movements and the impact of drive cycle times on output and other indirect costs.

For McLaren’s Plant Manager David Graham, these untapped productivity benefits are just as critical as reducing emissions. David explains: “With the majority of our tools, the injection, hold and cooling time are pretty much the same. However, as a result of the parallel mould movement, we estimate that we have shaved between one and two seconds off each cycle. For a high volume and technical moulder like McLaren, this equates to higher profits.”

Team members especially value the visual way each machine presents the energy consumption per kilo of material. “Although this is a new control system for McLaren, it’s extremely intuitive for the setters to operate,” adds David.

Stakeholders in the third-generation family business founded in the 1960s have been just as impressed. Based on the energy monitoring results and team feedback, the leadership team is already considering further investment in all-electric technology.

Already an ISO1400-certified firm, several years ago McLaren replaced its high sodium lighting. They also installed a closed-circuit water cooling system that utilises Scotland’s natural climate. In especially chilly conditions, there have been instances where the firm’s chiller gas compressor system doesn’t come on at all, notes David. “Potentially we’ll look at upgrading a larger tonnage and fast cycling packaging machine from our moulding fleet next,” he adds.

According to the UK Office of National Statistics, between 2000 and 2018 the energy used to achieve the same output in the industry has fallen by more than one-third (35 per cent), reflecting improved efficiencies.[i]

The increasing adoption of clean and renewable energy solutions, especially by the manufacturing community, is a positive, states UK Managing Director of Sumitomo (SHI) Demag, Nigel Flowers. He comments: “Like McLaren, many UK plastic processors are keen to opt for more energy-efficient systems. Having access to this commercial evidence is a real step-change for moulders and stakeholders, providing proof that manufacturers are taking steps to reduce their environmental footprint and contribute to the circular economy,” ends Nigel.