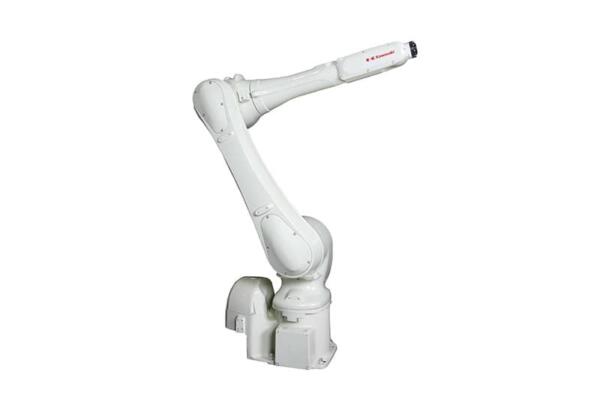 The all-new Kawasaki RS13N industrial robot is about to be introduced to UK users and a sneak preview video has emerged showing it in action.

The 6-axis machine has a wrist twist of up to 730°/sec, an arm rotation of up to 265°/sec and straight-line interpolation of 12750mm/secs, making it the fastest robot available in its class, says Kawasaki. Designed to move payloads of up to 13kg, the new model from Kawasaki offers users a reach of 1460mm whilst fully laden. Repeatable positional accuracy is guaranteed across the lifespan of the robot at +/- 0.03mm at full reach and the unit can be either floor or ceiling mounted.

In addition to its outright speed, the new model also offers space-conscious users a small footprint, making sure that it takes up minimal space on the shop floor. Further, the arm is rated to IP67 meaning that the robot can be used in washdown or high-hygiene applications such as those found in the food processing or pharmaceutical industries.

Over time, Kawasaki Robotics sees the all-new RS13N replacing one of its most popular ever models, the RS10N, which was first deployed into active service in 2009. Examples of this previous model have delivered sometimes staggering numbers of cycles – Kawasaki says that one customer has seen more than 12 million fault-free cycles performed with nothing more than routine scheduled maintenance required.

In advance of the first RS13N units arriving in the UK, Kawasaki Robotics has released a video providing a sneak preview: