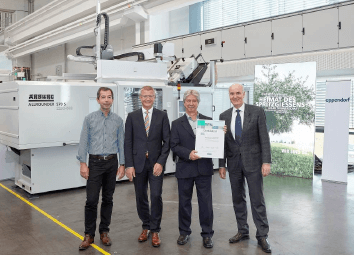 The guests from China were welcomed by Managing Partner Renate Keinath: “It is a great honour for us that you have undertaken the long journey to celebrate the handover of your 300th Allrounder here in Lossburg.”

Managing Director Sales Gerhard Böhm gave a review on the successful development of cooperation: “Since the purchase of the first Allrounder, Hongfa has expanded its machine fleet continuously and with increasing speed. The 100th machine was purchased in 2011; at the beginning of 2016, it were already 200 Allrounders and today – barely one and a half years later – we celebrate the handover of the 300th machine. This development is truly impressive!” The Hongfa delegation was accompanied on their trip by Zhao Tong, Managing Director of the Arburg organisations in China.

In his address, Hongfa Group Chairman and President Manjin Guo focused on the excellent, long-standing cooperation between the two companies: “Arburg’s extensive support has played an important role in the development of Hongfa as the world’s largest relay manufacturer. From products to service, everything has always been of perfect quality.”

Founded in 1984, Hongfa has a total of 16 production facilities in China. The product range comprises 160 relay series with some 40,000 standard specifications, which are used in the automotive, telecommunication, safety and control technology, household appliances and aerospace industries. Hongfa uses close to the entire Arburg machine portfolio in its production: the hydraulic, hybrid and electric Allrounders are mainly used for thermoplastics, but also for thermosets.

On Friday, 29 September 2017, Eppendorf Polymers visited Arburg headquarters in Lossburg to celebrate the acquisition of their 100th Allrounder machine.

Eppendorf and Arburg have been cooperating together since 1960. The first Arburg machine was one of the legendary C4b series and was used in the first injection moulding trials for the production of pipette tips and test tubes at the company’s headquarters in Hamburg. The Eppendorf Polymere company now specialises in plastics production. Its machine fleet comprises 70 injection moulding machines, 60 of which are Allrounders with clamping forces of between 500 and 2000 kN.

“This event is a milestone in the long-standing, successful and close cooperation between our two companies,” said Rainer David, Managing Director of Eppendorf Polymere. “Our plan is to use the milestone machine to manufacture medical microliter plates.” This is Eppendorf’s sixth hydraulic two-component Allrounder. All of these machines have the second injection unit mounted “piggyback-style” at a 45 degree angle.

A successive changeover to electrical and hybrid Allrounders for the production of single-component parts began in 2009. “This enabled us to reduce cycle times by up to 15 percent, which led to a significant increase in production efficiency with our high-speed applications,” explains Rainer David. Several Allrounders operate with a Multilift robotic system and a number of turnkey systems with downstream processing are also in operation at Eppendorf.

With 3,000 employees, the group has subsidiaries in 26 different countries and is represented by sales partners in all major markets.