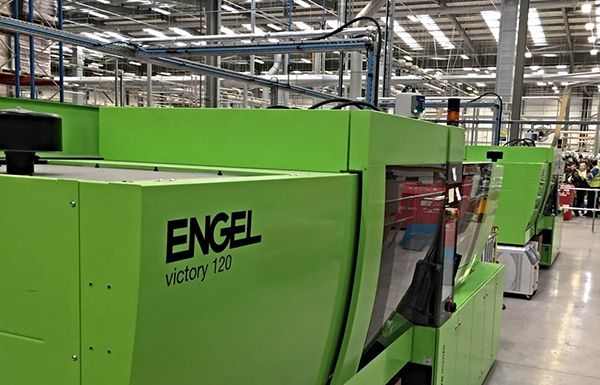 The U.S. owned company, which has its international base in Melksham, had identified a requirement to become more reactive to production demands by carrying out their own moulding of components.  This would enable them to reduce both the amount of components they held in stock and shipping costs.

Initial investigation for this project highlighted a key necessity to be able to reduce the machine’s downtime without the need to have longer production runs of moulds. Herman Miller set a target for the mould change time and specifications for the equipment. Requirements included low energy usage, low noise, a side-loading option, magnetic clamping, quick connection of services and globally available components and customer support.

In choosing ENGEL UK to provide the machinery, Martin Waller Head of Engineering says “ ENGEL best met the requirements and were able to offer most of our requests as standard options. Their tie-bar-less machines offered us the required platen size within a reduced footprint of the machine. ENGEL also understood what we required from the machines and the unique aspects of our process (quick mould change, side loading, etc.) and were able to deliver a completely integrated system as one package using globally available components.”

He continues “ENGEL have delivered a system that has allowed us to maximise the available platen size that with an alternative tie bar machine would have resulted in needing a larger, higher tonnage machine. Being tie-bar-less we have been able to take full advantage of side loading to tools to significantly reduce our tool change times.”

ENGEL UK Area Sales Manager, Steve Taylor comments “We supplied Herman Miller, who had not previously moulded in the UK, with two Victory 650/120 TECH tie-bar-less machines that they chose due to the easy accessibility. This was an essential feature as they planned to side ‘quick mould change’ load moulds using Staubli couplers & magnetic platens and a locally sourced mould carrier system. Herman Miller’s operators like the interface of the Engel machines. They have quickly become confident in the controls of the machines and have found it easy to navigate through the function menus. They have also set up the displays to their own preferences, allowing them to quickly access the functions they commonly use.”

Herman Miller reports that since the commissioning of the injection moulding machines they have been able to reduce the amount of stock components they hold. This has freed up space in their warehouse and reduced their shipping costs.

Martin Waller says “The ENGEL machines have enabled us to respond in an agile way to any change in production demands. By being able to act more quickly, we are able to respond faster to customer orders.”