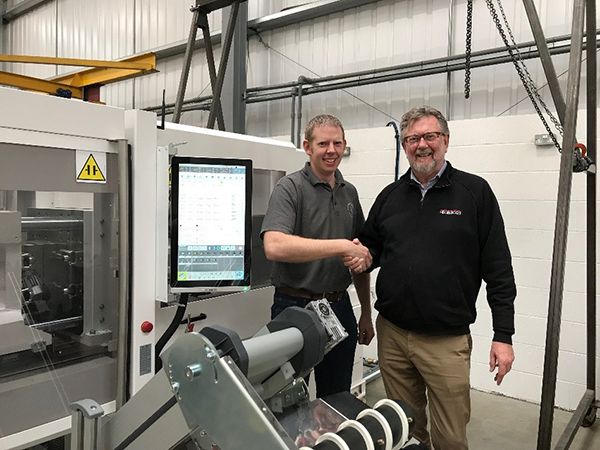 Following a recent doubling in size of their County Durham based facility, IVM Ltd have taken delivery of their third Negri Bossi machine in the last 18 months.

The ELE All-Electric machine was purchased primarily for IVM’s speciality in the production of small clear products. These include polycarbonate optical lenses, light guides, and medical items.  The machine will only ever run clear materials, avoiding any possibility of colour contamination.

IVM’s technical expertise is unparalleled; tool validation studies being a regular service offered to their clients.  The detailed reports generated include detailed setting sheets, tool improvement schedules, fill studies, and even provide bench mark samples. This knowledge base has allowed them to quickly exploit the benefits offered by the ELE series machine.

“The level of performance that the new machine offers is extremely impressive. The original cycle time has been reduced from 23.5 to 17.8 seconds, and we believe that there are still more savings to find.  Hold and cooling phases are obviously fixed, but we now have the ability to eject components ‘on the fly’, combined with significantly faster material injection rates and opening and closing speeds.”

“Operating at high speed obviously raises concerns over mould safety, but the machine monitors motor torque so precisely, that we are able to trigger mould safety protocols with slivers of cardboard or apple peel.”

Although faster cycle times are always welcome, the main motive for IVM’s investment was a gain in levels of accuracy and minimising levels of non-conforming product.

“Our six-impression lens tool has been running with a phenomenal 0.01mm variation in mould cushion.  We are also able to inject material at much faster rates and with greater levels of control.  This has minimised moulding defects such as material flow lines, as well as reduce levels of ‘start up scrap’, as we are achieving optimal processing levels very quickly.”

The ELE All-Electric machine range offers eight models from 50 to 350 tonnes lock.  A 130-tonne machine is currently available to view at Negri Bossi UK’s Rugby showroom and a machine will be on demonstration at this year’s PDM exhibition. PDM takes place on the 19th – 20th June at the Telford International Centre.