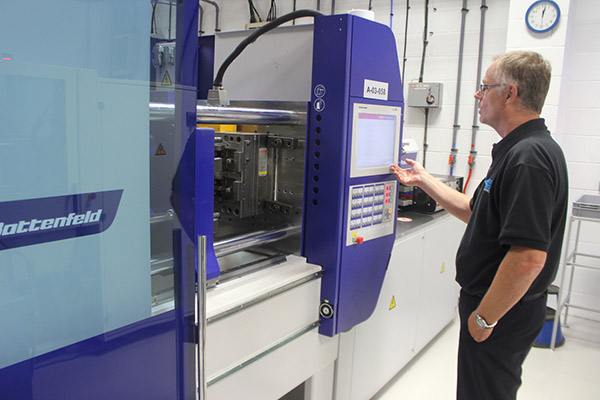 From the introduction of the SmartPower range of injection moulding machines, Dan Williams, joint Managing Director of Wittmann Battenfeld (WIBA) UK knew that something special was about to happen within the UK’s injection moulding community.

A former associate of Dan’s in Battenfeld UK’s service engineering side had recently become a customer of WIBA UK, running a contract injection moulding business in the North of England. Dan recalled:

“We had known each other for some years and so all technical issues were very well understood and the purchase and delivery of the customer’s first SmartPower 120 went very smoothly. So when my contact called me a few weeks later and said that he needed to speak to me urgently – and in person – I could only assume that something had gone wrong.”

It turns out that the customer had been conducting some extensive energy-usage trials, comparing the new SmartPower to the older machine of equivalent size.

“I sat down in his office and heard the following: had you told me when I purchased this SmartPower that its energy performance would be eight times less than our previous machine – at best I would have dismissed it as sales talk and at worst I would have accused you of being a liar.”

Needless to say, Dan’s customer was more than happy with his own energy results, and subsequently went on to purchase two more SmartPower machines within weeks based on his own findings.

It goes without saying that successful injection moulders by definition are extremely mindful and competent in managing their costs in microscopic detail. Polymer purchasing and labour generally comprise the bulk of the operational cost – but utility costs –  including power and energy – generally comes in in third place.

From the very beginning of Wittmann’s purchase of Battenfeld on April 1, 2008, energy efficiency, therefore, played a key role in all the equipment supplied by the new company Wittmann Battenfeld.

Indeed, issues of power (and power saving) were factored into the launch and the names of the new brands of injection moulding machinery straightaway. The first fruits on the marketplace were the MicroPower, EcoPower and MacroPower machines, and for some years now the SmartPower has been leading the way in terms of world-class energy consumption.

In short, the Wittmann Group has become a leader and pathfinder in energy-efficient technology throughout plastics processing. As Industry 4.0 and Wittmann 4.0 advance into every corner of manufacturing life so the carbon footprint of manufacturers will become clear and transparent in the supply chain.

A measure of ‘energy use per part’ or ‘energy consumption per moulding/product’ may well become an important statistic – not only in determining production cost but also in assessing consumer appeal and in winning contracts for environmentally conscious OEM manufacturers. The environmental performance of injection moulders will be assessable and judged.

One WIBA UK customer that has shown significant awareness of this topic is Oxfordshire-based White Horse Plastics (WHP).

In fact, the customer’s savings – achieved via its SmartPower injection moulding machine – were so astonishing that WHP had to check its methodology twice, in order to be sure of the accuracy of the results.

“After labour and raw material costs, energy and utilities present us with the next most significant overhead. Accordingly, we made electricity consumption one of our key business focuses.”

One of the metrics that WHP set itself was to better understand the true cost of energy consumption across the entire WHP plant and factory. The main contributors such as injection moulding machines (IMM) were assessed first, together with the main ancillaries used in production, including material driers, tool-heaters, temperature controllers, hot-runners and other equipment.

Initially, and with the help of WIBA UK, it was decided to evaluate some of the company’s older machine stock versus their latest Wittmann Battenfeld SmartPower IMMs.

In order to get authentic and comparable data, an energy logger was used to measure the actual KWh consumed.

The following results were obtained: 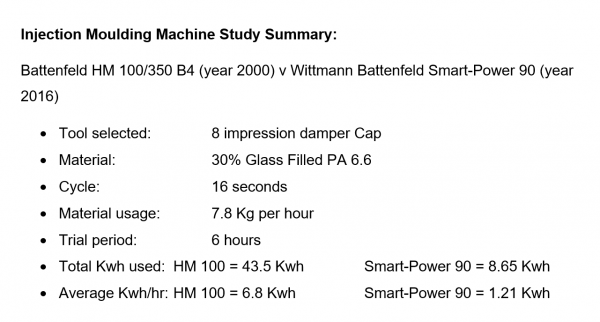 “I always expected to see some significant improvement when comparing old to new. However, these outcomes were far more impressive than could ever have been hoped for.

“In fact, the greatly reduced running costs from the SmartPower machine were so incredible that it led to us repeating the exercise in order to check our methodology. However, when repeated these results were exactly the same. These machines are called SmartPower for a very good reason and the energy savings achieved are truly world-class.”

The outcomes of the WHP energy measurement exercises have now revealed the energy-saving potential future for the WHP business as a whole.

“WHP’s purchasing strategy will now change – and where an existing plant is to be replaced, energy efficiency will now be considered equally with technical processing specifications.”

Indeed this factor played a clear role in the purchase of WHP’s second SmartPower machine – supplied this year.

Further north in the East Midlands at Thomas Dudley-owned Rugby Plastics similar experiences have emerged; Dr. Stephen Pepper has been leading the company drive towards factory efficiencies. In this case, a SmartPower 50 injection moulding machine was the basis for the energy measurement work. The machine was supplied with servo power and a quality control package and it also deployed the regenerative KERS braking system so effectively used by the Wittmann Group.

The SmartPower at Rugby Plastics was compared to a machine that had been supplied in the early 1990s. Unsurprisingly perhaps the test results were astounding.

In other words, the SmartPower injection moulding machine was six times more energy-efficient and six times less costly to run than the older machine.

Performance improvements were also evident in the reduction of cycle times that could be compared across both machines. The first mould tool needed a cycle time of 39.5 seconds to complete moulding on the old machine. With the SmartPower 50, that cycle time was reduced to 23.43 seconds.

The second mould tool needed a cycle time of 25.6 seconds to complete moulding on the old machine. When used in the SmartPower 50 that cycle time reduced to 18.68 seconds.

Dr. Pepper’s analysis showed that not only would the SmartPower allow the removal of an expensive chiller unit within the production cell, it would also provide a great improvement in process control.

Financially it could also achieve a theoretical improvement in gross margin by £16,296 per annum. Use of the SmartPower 50 machine alone could achieve an annual reduction of 19597 kWh at the company, based on the production of 120,000 units per annum.

“Our SmartPower offers us low-energy cost production. The running electricity costs are a fraction of kWh per kg of material processed. With our complete cell optimised and with the Wittmann robot in eco-mode the energy cost can be a little as 20% of a non-servo machine equivalent.”

“My accounting background and expertise tells me that the low running costs of Wittmann-designed equipment have to be a primary consideration for our customers in any purchasing decision. Customers are increasingly factoring these numbers into a lifetime of machinery performance – over ten, fifteen, twenty years.”

Tracy also notes that WIBA UK is able to confidently model and forecast the energy and cost they will save prospective customers once the SmartPower injection moulding machine is up and running in factories.

She says that WIBA UK’s modelling of future energy consumption “comparing it to the customer’s existing costs are very conservatively based. And yet the figures still astound me: One example of a prospective SmartPower 90 machine purchase calculated that the SmartPower would use just 2.7kW of energy, compared to the customer’s current machine which was currently running at 15kW.”

And it’s not just the SmartPower brand that carries all the energy-saving benefits. All other machines in the WIBA range – including the MacroPower – are equipped with the same performance benefits.

Tracy points out that “our savviest customers in the UK and Ireland are increasingly realising that Wittmann Battenfeld’s dedication to energy efficiency is not simply about money – though that is a key consideration. Low energy production is also helping to future proof businesses in terms of transparent Industry 4.0 production and securing a low environmental footprint.”

“I hesitate to use a well-worn phrase, but really there is no alternative. The future of manufacturing itself is headed in a low-energy direction and we at WIBA UK are delighted to be helping so many in this manner.”