Leveraging the Opportunities Offered by Big Data and AI 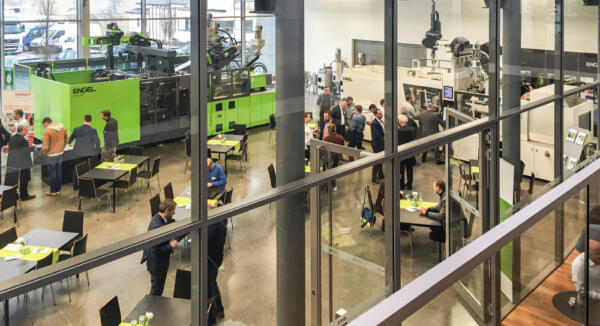 With more than 100 guests, the medical technology conference hosted by ENGEL Deutschland at its Technologieforum Stuttgart in mid-February was a huge success.

Patient safety through advanced technology was the overriding topic at med.con 2020.  It was discussed from the various perspectives of plastics processing in the cleanroom and conveyed in a tangible way using live machine exhibits. Artificial intelligence and Big Data formed one focus; after all, the potential for more quality, safety and cost-efficiency in medical technology has not yet been fully exploited.

“The volume of data generated is increasing, but the use of the data is not,” said Uwe Herbert, IT Manager with Ypsomed, a manufacturer of injection systems for self-medication, in his keynote summing up the massive challenge. “We are passing up opportunities here.” In order to improve the quality of the products while at the same time reducing unit costs, Herbert advocates linking the IT systems of the individual departments in the company and giving employees the freedom they need to experiment with the new possibilities. However, the complexity of these projects is often underestimated, according to Herbert.

“We need to shift up a gear when it comes to artificial intelligence,” emphasised Christian Pommereau, Principal Engineer with pharmaceutical company Sanofi-Aventis Deutschland, who has witnessed within his own group of companies how far ahead the drug production industry is in this field. “To avoid the plastics processing industry losing touch, we need everyone around the table.”

Both speakers sparked lively discussions, and it became clear that the industry has long recognised the great potential that Industry 4.0 offers. But barriers often remain in terms of adapting the new technologies to reflect the specific requirements of cleanroom production. For example, the validation of dynamic process control with the help of intelligent assistance, which is an essential feature of the smart factory, has to be planned in detail and designed safely.

Christoph Lhota, Vice President, ENGEL medical, reported on how ENGEL’s iQ weight control assistance system can be integrated into rules and regulations accepted by the auditors, based on ongoing development work. The ENGEL developers have investigated various approaches to the validation process and ultimately derived a procedure which defines process windows for the parameters to be retroactively adjusted, enabling the validation of dynamically controlled processes in conformity with both EN ISO and the FDA.

In his keynote, Christoph Lhota gave an outlook on other topics that are gaining in importance in medical technology and on which ENGEL’s developers are working intensively. They include the injection moulding of liquid silicone rubber in the cleanroom, efficient injection moulding of very small batch sizes and sterile injection moulding, as cleanroom class ISO 5 is increasingly required in plastics processing. “ISO 5 is a totally different planet. The opening speed of the injection moulding machine is significant here,” said Lhota. ENGEL operates its own cleanroom at its headquarters in Schwertberg in order to specifically adapt its machines, robots and technologies to this new class of requirements.

All told, the keynote session comprised eight presentations. The other speakers were Martin Maier from Waldorf Technik, Reinhard Steger from Braunform, Martin Jungbluth from Max Petek Reinraumtechnik, and Jörg Leonhartsberger and Claus Wilde from ENGEL.

Greater cost-efficiency in the cleanroom

There was plenty of networking at med.con. In the breaks, and following the talks, ENGEL opened up its technology centre with live exhibits and a partner exhibition.

ENGEL’s high level of expertise in systems solutions again became apparent in the cleanroom injection moulding applications. Sophisticated medical products were manufactured in highly-integrated and automated production cells throughout the event. On the one hand, there were thick-walled housing parts which can be produced in an 8-cavity mould using servo-electric Vario-Spinstack technology from Hack Formenbau in particularly short cycle times, and with a correspondingly low unit cost, thanks to the two-component process. On the other, there were needle holders for 1 ml safety syringes in a 16-cavity mould by Fostag Formenbau with a particularly low shot weight of 0.08 grams per part. The needle holders’ very thin and different wall thicknesses require extremely precise process control, which ENGEL ensures with iQ weight control. The needle holders are taken off by a viper linear robot and transferred to the pipe distribution system, developed by ENGEL and made completely of stainless steel, in order to package the filigree moulded parts sorted by cavity.

The attendees of med.con 2020 at the ENGEL Deutschland Technologieforum Stuttgart were not just from the subsidiary’s sales area, but also from other regions of Germany, from Switzerland and from Austria. Since the first ENGEL med.con ten years ago, the medical technology conference has become an integral part of the injection moulding machine manufacturer’s event calendar. It is one of the most important networking events in the industry.